Breakup and patch-up are very common things for celebrities but there was a couple in Bollywood going to give an electric shock to their fans. Obviously its an electric shock because nobody expected about this.

In an interview Katrina said, “My greatest fear is that if and when I get married and I am standing at the altar or the mandap, he (the groom) may not love me completely…..” which is a clear indication of the breakup of Ranbir Kapoor and Katrina Kaif, a golly jolly couple in Bollywood but unfortunately they are going to leave each other’s hand.

As we know that ex-girlfriend Deepika Padukone coming with Ranbeer Kapoor in the upcoming movie ‘Tamaasha’. Recently trailer released in which you can see a very hot kiss of Deepika and Ranbeer. Katrina is not happy that these two couple work together as she quoted,’I can’t enforce my will on the people in my life. Their choices are their own. I may not be happy with them but I hope that as they mature or as they evolve, their choices will change!”

As Kat said, “I am not as close to Ranbir’s family as I would like. But I would like to hang out with them more. Family would be a defining factor when I make the decision to marry. I am a very responsive person. So, if my partner gives me what I need, I can be the best girlfriend you can wish for.”

It was earlier disclosed that Ranbir’s monther Neetu don’t like Katrina. In fact a picture posted by Neetu on social media was cropped but after some the picture got revealed and the cropped portion was nothing else but the face of Katrina Kaif.

From the very beginning it is declared that Ranbir Kapoor has a clear image of chocolate boy because of his cute and shinning face. He is most popular in girls and also known as a lover boy in Bollywood film industry. His first movie was came with Sonam Kapoor and some news came out that they are in the relationship. Here’s not the end because Ranbeer publicly announced his relationship with Deepika Padukone but after some time he was came with Katrina Kaif and this time also without commitment.

Katrrina Kaif and Salman Khan a coupling which fans wanted in the real life but unfortunately Katrina broken up Salman Khan’s heart and gone with Ranbeer Kapoor but report says that Salman has strong connection in the break up of Ranbeer and Katrina because when Salman is coming with Katrina as per rumours. 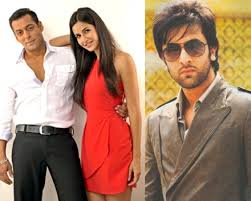 Offfff… But but but, news is not over because the very interesting thing is Ranbeer and Katrina are coming together in Zagga Jasoos even after breakup because they both are saying that shooting can’t be left. Due to their personal issues neither Kat nor Ranbeer ready to hurt their directors and producer.  Well, its Bollywood and anything can happen anywhere so be prepare for next bombing.

The Avengers vs The Justice League: Marvel Universe vs DC Universe